Robertino Diodoro doesn’t need a road map to get to the Canadian Derby winner’s circle. Originally from Calgary, Diodoro, who is now perennially one of the top trainers in North America, has won three Derbies – Broadway Empire in 2013; Edison in 2014 and Sky Promise in 2018. He also had Chief Know It All cross the finish line on top in 2017 only to be disqualified. Live on https://secure.xbglobal.com/main.aspx 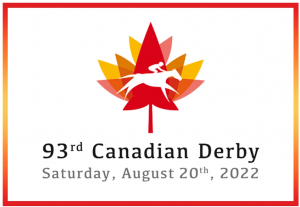 The last two years he knocked on the door step finishing second last year with Myopic – by half a length to Uncharacteristic – and second again two years ago when Something Natural lost by a head to Real Grace.

“Yes, the Derby has been good to me,” said Diodoro after taking the ‘Redeye’ flying from Del Mar, California to his home in Arkansas. “Coming to Edmonton for the Derby never gets old. I’m looking forward to getting there. “Running in the Canadian Derby is still very exciting. I’m flying into Calgary a week from Monday. My parents are picking me up and we’ll drive to Edmonton. I’ll be in Edmonton for a week.”

Diodoro comes into this year’s August 20 Derby at Century Mile with two of the favourites: RED KNOBS (Union Rags), winner of the August 1 Manitoba Derby with an 81 Beyer Speed Figure, and stablemate GREAT ESCAPE (Midnight Storm), who ran second in Winnipeg. Both horses should like the Canadian Derby’s classic mile and a quarter distance.

“The extra ground should be good for both of them,” said Diodoro, who has 2,915 career wins with his horses earning over $57 million. “I think both horses have the potential to take another step forward. They both came out of the Manitoba Derby good. They both shipped well to Century Mile in Edmonton. And they both trained back well. Now we’ll keep our fingers crossed that they stay healthy.”

Both good-sized horses, Diodoro said “Great Escape still needs to fill out a bit. He’s meant to be a good horse.” While no one knew it at the time, Great Escape showed that when he broke his maiden last September at Churchill Downs. Finishing sixth behind him was North America’s top three-year-old, Epicenter.

It’s still the only time that Epicenter hasn’t finished first or second. Runner-up, as the favourite, in both this year’s Kentucky Derby and Preakness, and in his last start just a week ago — Epicenter won the prestigious Jim Dandy at Saratoga. A winner of $2.2 million, Epicenter’s next start is expected to be in the Travers.

While his maiden victory is still Great Escape’s only win, Diodoro said “He still hasn’t put it all together. Hopefully, sooner or later, he will.” And hopefully for Diodoro and his owners that comes in the Derby.

While Red Knobs went past him fairly easily in the Manitoba Derby — which gave Diodoro a record fourth triumph in that race — Diodoro said jockey Rico Walcott told him that Great Escape can turn the tables in the Canadian Derby. “Rico said the track at Century Mile is a little faster than it was in Winnipeg and that Great Escape is going to like that.” Asked if he thought the same, Diodoro said “That’s a question I don’t want to answer.”

As for Red Knobs, Diodoro said that three-year-old can improve off the Manitoba Derby too. “He got a perfect ride from Jorge Carreno. He stayed off the rail a bit. Jorge sat chilly and everything lined up just perfectly. A little racing luck never hurts.” Carreno is expected to ride Red Knobs in the Canadian Derby too.

In his two starts before the Manitoba Derby, Red Knobs against older horses while finishing second and third. “That always means something I think,” said Diodoro. “Both are solid horses. Good-sized, solid, sound horses. Horses that you can push on and will put up with a little training.”

*Note – The winner of the Canadian Derby gets a free berth into the Ontario Derby in October at Woodbine. If a horse can win both races, the horse will earn a $50,000 bonus.